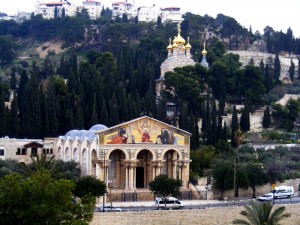 Churches on the Mount of Olives.

Chapel of the Ascension

Built during the last years of the 4th century, the Byzantine period, the Chapel of the Ascension is designed in a perfect Byzantine architecture style. It is said this is the location of Jesus ascension to heaven, forty days after his resurrection. During these days, Jesus appeared before his apostles several times.
The wonders of the church became known to the public after a story spread that the builders couldn’t tile the floor because the tiles “refused” to stay put. It is rumored Jesus’ footprint still remains in the place.

The second stage of our Israel tour of Christianity in Jerusalem is a unique view point over the Temple Mount, the Dome of the Rock, the Mount of Olives and Mount Zion.
A breathtaking view of so much history still soaked through the city and its sacred stones.

At the center of the mountain we can see Dominus Flevit Church (the Lord wept). This is where, according to Christian tradition, Jesus wept for the fate of the Temple in the year 33AD.
Dominus Flevit Church was built in 1955 and designed by Italian architect Antonio Barluzzi. This is a chapel shaped as a Greek cross with a dome shaped like a tear. This is one of the only churches in which the altar is not in the eastern part but on the west, facing Jerusalem as seen by Jesus.

The chapel is built on the lower slope of the Mount of Olives in 1919. It was designed by formerly mentioned, famous Italian architect Antonio Barluzzi. Many countries took part in the building of this church, and their unique symbols appear in the apses and domes of the church.

This church is known as one of the most beautiful churches in Israel, and is considered second in importance to the Christian faith, after the Church of the Holy Sepulcher.

The Via Dolorosa, or the Way of Grief, is one of the most famous and sacred streets in the Christian world. The street symbolizes Jesus path when he walked, carrying the cross on his back, from the court to the crucifixion location in the Calvary.
There are 14 stops on the Via Dolorosa, 9 of them are along the path and 5 are in the Church of the Holy Sepulcher.

Church of the Holy Sepulcher

The next stop in our Christian tour of Israel and Jerusalem in particular is the Church of the Holy Sepulcher, the most sacred place in the world for the Christian faith. Here Jesus was crucified in the Calvary, here he was buried on Friday and here, on Sunday next, he was resurrected for 40 days. During these days he appeared before people, mostly his apostles, until he left this world through the Mount of Olives, in the Chapel of the Ascension.
The Church of the Holy Sepulcher has been, and still is, a key location for Christianity since the Byzantine period. It was ruined and rebuilt several times and for the last 800 hundred years was renovated constantly, a fact that quite deformed its original shape.
The Roman emperor Constantine the Great, who was converted to Christianity in 324 AD and turned the religion into the greatest monotheistic faith in the world, sent his mother, Helena, to Jerusalem in order to find the sacred religious spots for Christianity. Once acknowledging this location as the tomb of Jesus, Constantine the Great ordered to build the greatest, most beautiful church in the world in this spot.
The building began in 326 AD and ended in 335 AD. The church was inaugurated in a grand and special ceremony, and the multitudes of Jerusalem attended it.

David’s Tomb is the common holy place for all three monotheistic religions: Judaism, Christianity and Islam.
Jews attempted to purchase the admired David’s Tomb as early as the 15th century. As a result, a fierce strife broke out between the Jews and the Christians, which contributed to the fact that the ones to hold it eventually were the Muslims, who worship David as well. The building of David’s Tomb also holds in it the Cenacle (The Upper Room), the location of the Last Supper.
Since the 7th century it was thought that David’s tomb is located in Bethlehem, but not soon after, the tradition changed to mark the Cenacle as the correct place. This is probably based on Peter’s saying that David’s tomb: “Brethren, I may confidently say to you regarding the patriarch David that he both died and was buried, and his tomb is with us to this day”.

The location of the Last Supper which was also Passover Seder. Here Jesus washes the feet of his disciples, and here is the origin of the Christian sacrament: the Eucharist. Tradition tells us Jesus appeared here after his resurrection. This is where the Holy Ghost appeared before the apostles in the shape of fire during the Shavuot holiday, which marked the beginning of the missionary to spread the faith.

The abbey standing today in this location was built in 1900 and inaugurated 6 years later. This abbey is dedicated to the dormition of Mary mother of Jesus, which was pure of sins, which didn’t die naturally, but fell into an eternal dormition at this exact spot.
The abbey is built on a land given to Wilhelm II, first king of Prussia, last Kaiser of Germany, from the Great Turkish Sultan Abdul Hamid. Wilhelm II, in turn, granted the land to the Catholic union, who gave it to Benedictine monks that built this abbey, which is regarded as one of the most beautiful ones in Jerusalem.

In 1898 Wilhelm II, first king of Prussia, last Kaiser of Germany arrives in Jerusalem. In his honor, a new path into the city is created. A moat near the wall is filled and a new gate is opened for the king to go through with his carriage.

All of these unique sites and much more excitement await you in Jerusalem! 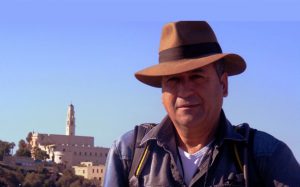